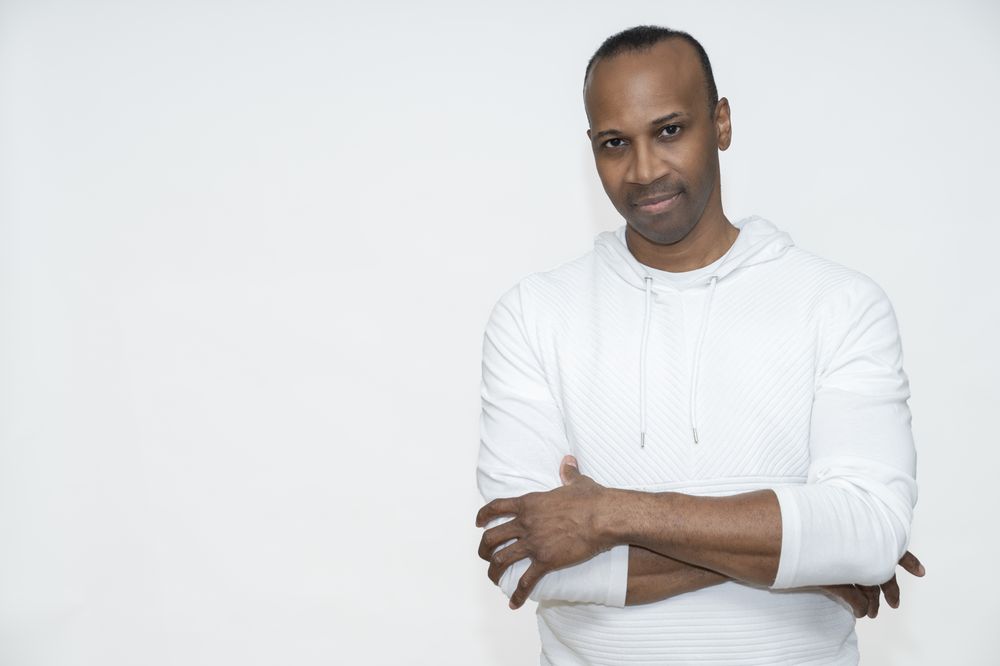 Michael North was born in Hinsdale, Illinois, a small suburb of Chicago, where he grew up listening to his dad sing and watching him perform as a member of the Doo-Wop group, the Spaniels. Michael’s father secretly, or not so secretly, wanted to start a family band, with Michael and his brother singing. It was kind of annoying for the boys, at the time, because their dad would try and get them to sing along with him every chance he could. This was at the beginning of the Jackson 5 era, and people everywhere were probably looking at their families and thinking, “Hey we can do that!”

At eight years old his family moved, to what he jokingly refers to as the boondocks of Oklahoma. This was when the school band teacher encouraged what she saw as natural musicality in Michael. She talked to his parents about letting him be in band. He started a bit late because they didn’t really have the money to buy him a trombone but somehow his parents managed to work something of a payment plan out with the store, and he was the proud owner of a brand new trombone.

“I can still remember the smell of that new trombone and my oversized brown trombone case which I had to lug to school…not so fun, but hey you have to do what you have to do. I suppose it could have been a tuba so what am I complaining about?”

Music was his life: marching band, jazz band, travelling band trips which took them to Nashville one year to play on the stage of the Grand Old Opry! Michael didn’t start out in music singing, but first played the trombone, tuba, marching sousaphone, drums, baritone, guitar and piano. All of these experiences he uses today in the studio, especially all of the drum background. He’s able to program drum tracks and create music from just a palette of sounds and infinite rhythms which exist in his head.

“So singing wasn’t even on the radar at all growing up. But I can remember having the thought at a very young age… that I had a lot of songs in me. I just remember people commenting on how cool my dad was. (One time while watching him perform) I remember one lady saying…”That’s your dad up there!”. I guess it kind of made a subconscious stamp in my brain because now I’m the one up on stage…”

Michael’s main instrument today is his voice. Michael realizes that, of course all of the glory goes to God because He put the gift in Michael, and He put him in the places to get the practice, development and experience to be able to produce music. He thinks it’s kind of funny how a thought and inclination from so many years ago is his reality today… and knows that God is so good.

Michael left the countryside right after high school to attend college and pursue big dreams in Los Angeles, California, which he has known as home ever since.

“I can remember riding from LAX in a van with other students just freshly arriving to attend college in Pasadena. I seriously thought I was going to die on the freeway. I had never seen so many cars, so many people, big buildings…it was crazy!”

Michael's dive into the singing arena happened his freshman year in college when a good friend suggested they sing for an upcoming dance. They were a huge crowd favorite! From that incredible night there was no looking back. The boys then formed the group “Brothers 3.” They performed all through college together. Michael did all of the musical arrangements for the group, teaching every member their individual parts. After college, Michael started a new band, ”Between the Lines,” with a few friends who wanted to pursue musical careers, as well. They mostly sang in churches, but they did have a record deal with a small independent label and actually released a song which Michael and his brother sang vocals for. It was played pretty heavily on the South/East coast. It was through this that a little bit of his dad’s dream came true.

Michael understands the importance of melody and harmony. When he’s creating a piece of music he can actually hear the music in his head, and he believes that God gives him the notes and the lyrics. And he just says, “Ok; that’s how it’s supposed to go…so I get out of the way and allow it to happen. It’s the most incredible process and the most fulfilling feeling you could ever imagine to hear a finished piece of music and know that It’s way bigger and better than anything you could have ever created on your own…again Praise God! I believe that only with God’s blessing and inspiration is music able to truly reach and touch peoples hearts.”

In 2003 Michael became the Worship Leader at the now 12,000-member church Shepherd of the Hills, in Porter Ranch, California. He has since launched the production company NORTHOUSE in 2006 which has released more than 13 titles including several contemporary live and studio projects. In 2005 Northouse combined efforts with Steve Syatt, the creator of the popular children's hit show Shushybye. Together almost 80 songs penned by Syatt and produced by NH are now heard around the world by millions of adoring fans of the show.

In 2010 Michael started to have serious vocal struggles. Increasingly it became more difficult to even make it through each weekend of singing at church. He would get very vocally tired and basically had to stop all of his studio work outside of church. “The frustration of not being able to really create or record anything was discouraging and taxing on my spirit.” Finally after seeing his doctor, they found a small lump in his throat. The first thing the doctor said was it probably had to come out. Michael discovered that you really can’t know what someone goes through, especially if they’re sick, until you have to go through an ordeal yourself. Well now was the time to face one of the most difficult challenges of his life. “I made a conscious effort to not even say the word cancer. I would just refer to them as bad cells. So I had the first round of tests, which included an ultrasound and needle biopsy. After much prayer and truly realizing that my life was in Gods hands we got the report back from the doctor.....all indication was that the tumor was benign. "To God be the glory…but I was not out of the woods yet.” He still had to have the surgery, so they scheduled a date….Aug. 5th 2010. God brought him through with flying colors and he was miraculously able to talk right after the surgery and even lead worship 10 days after the surgery! In his mind: A MIRACLE.

Michael’s defining scripture is Joshua 24:15 “As for me and my house we will serve the Lord.” He has made it his aim to fulfill the vision of NORTHOUSE, which is to recapture true values through entertainment. All Northouse projects are approached with the spirit of excellence and the spirit of wholesomeness that is God. Opening up the door to more of a jazz sound is something Michael started with the release of his first Christmas album in 2011. As a young kid, he grew up listening to Frank Sinatra, Mel Torme, Bing Crosby and all the great crooners. Of course his favorite was Nat King Cole. He remembers having a stack of old 33 record albums and Nat’s were some of his favorites. He would memorize the songs and really try to internalize the spirit and style of singing. The latest Northouse release "Just For The Swing Of It" features the new Big Band-esk sound of Michael's smooth crooning vocals. When you listen to Michael's new sound immediately you start tapping your toes and dancing in your seat. The responce is to immediately get up on your feet and start swinging. With the release of this latest Northouse project, swing is definitely back!

“I sing and write because very simply…I feel this is what I was created to do. I’ve really thought about this, and I believe that it is ALL about GOD. You see, only He could have known that making music would bring me the joy like it does. Nothing on this earth brings me more joy and fulfillment than making music. It’s why I can spend hours in the studio and not even think twice about it. It’s because I was made to do it. There’s no other explanation. But the kicker is this… God gave me the gift to do something that only He knew that I would enjoy and love so much…which is why He gave me the gift. You can see it’s a completed circle, which is all about God. He gives me the passion to do something that He placed deep inside me. And then all the experiences and songs and performances etc, He allows to cross my path to fulfill that desire that He placed in me… and through this fulfillment He gets glory as I walk out what He created me for. It’s all very deep but yet so simple…Praise God!”

“With God’s blessing and grace, I believe NORTHOUSE will continue to be a shining presence in the world of entainment. The best piece of advice I could and would give to anyone is this...don’t be afraid to dream BIG. That still small voice inside that has given you the desires and dreams which you have is GOD. Trust in Him with all of your heart. Don’t be afraid of working really hard, and never give up!"